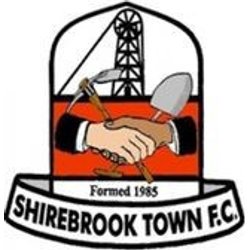 Shirebrook Town Football Club formed in 1985 when the then very successful Sunday side decided it was time to try their hand at the more professional side of non-league football. Back then they were known as Shirebrook Colliery but, when the colliery closed in 1993, they changed their name to Shirebrook Town.

Warren Terrace was the venue for home games, but they soon realised that it was not suitable for the level of football they were hoping to attain. With this in mind, Langwith Road became the new home and, with some good local sponsorship, floodlights were erected. This was the first major phase of a program of ground improvements.

Town have always produced good teams, as well as good individuals, and there have been quite a few different records smashed in recent years.

Stuart Greenwood, ex-first team manager, is the longest ever serving, having joined the club in August 1987 and resigning as manager in 2007. Martin Rowbottom is the most capped player, with 384 appearances. Notable leading goalscorers have included Gary Quincey, Stuart Greenwood, Brendan Yates, Nathan Booth and Lee Widdowson.

The record attendance at Langwith Road is 2,200 when Mansfield Town came to play as part of a deal that saw Gary Castledine move to the Stags in 1991, Steve Harris scoring the only goal of the game to ensure Shirebrook fans went home happy!

The club was promoted to the Supreme Division of the Central Midlands League in 1991, having finished 5th in the Premier Division, before adopting the ‘Town’ name in 1993. They struggled in the first season and finished 14th out of 18 clubs but, after a number of seasons in mid and lower table, they were runners-up in 2000, going one better in 2001 and winning the championship.

Gound grading meant they were passed over for promotion to the NCEL that year, but they went one better and won the league in 2002, just to prove they were not downhearted by the rejection (beating Clipstone 12-0, to record their biggest ever win) and this time their application for a step up was accepted.

They finished in a promotion position in their first season in Division One of the NCEL but, once again, they club failed to satisfy the ground graders and were refused promotion to the Premier Division.

Heartened by the fact that they had been down this path before, they promptly set to and completed the improvements required, which in fact had been already underway but not completed, including a brand new dressing room which was opened by World Cup 1966 winner Ray Wilson in the evening after they had secured the Division One championship with victory at Lincoln Moorlands. The travelling support that day boosted the home crowd around 10-fold.

This time there was no denying Shirebrook their place in the Premier Division, and they stepped up to finish 10th in the 2004/05 season.

The Langwith Road ground now had an overall capacity of 2000 of which 400 was under cover and a further 300 seated, and there was also wheelchair access provided, all helping confirm the club’s ambitions of gaining Northern Premier League status.

However, Shirebrook found it hard in the Premier Division, struggling each season afterwards to break out of the bottom half of the table, and they were eventually relegated to Division One after finishing second-bottom at the end of the 2009/10 season.

Nevertheless, with ex-Rainworth Miners Welfare boss Rudy Funk coming in as manager around Christmas 2010, bringing an influx of new players and backroom staff with him, there was a definite buzz around the club again.

But Rudy didn’t stay very long, a move to NCEL Premier Division side Scarborough Athletic taking him away from Langwith Road with just a month of the season left, leaving assistant Micky Taylor in charge, with the side in relative safety in mid-table.

Following that, Micky was confirmed as Shirebrook Town’s new manager before the start of the following season and, together with assistant, Dougie Etches, he set about putting together a squad capable of challenging for promotion.

However, things didn’t quite go as planned and the side failed to improve on the previous season’s finish. On a much brighter note, though, Shirebrook reached the finals of both the Wilkinson Sword Trophy and the League Cup, but defeats in both games led to a feeling of overall disappointment with the season, and that eventually caused Micky Taylor and his management team to leave Langwith Road.

Nevertheless, the start of last season brought fresh optimism to the club, with former local favourite Gary Castledine returning to Langwith Road as manager, with Jamie Kirk as his assistant.

But, after encouraging wins in their first two official games in charge, results then began to go badly with only one more win coming from the next eight. And there were defeats - some of those heavy - in the remaining seven games, including an early exit from the FA Cup competition.

All that - coupled with unhappy supporters and falling gates at Langwith Road - led to Castledine and Kirk leaving the club after just ten games at the helm.

And, with the duo gone, the club’s vastly experienced central defender Chris Timons agreed to take charge of team affairs on a temporary basis, whilst replacements for the former management team were found.

But the club moved quickly and Timons was in charge for just one game - a welcome reversal of fortunes and a home league win against Grimsby Borough - before experienced former Sheffield FC manager Mark Shaw and assistant Peter Shuttleworth took over at Langwith Road.

And so to this coming (2013/14) campaign, Shirebrook Town will be looking to improve on last season’s very respectable sixth-place finish in Division One of the Northern Counties East League. And that’s in spite of the surprise departure of Mark Shaw and his management team, who left to take the reins at Evo-Stik Premier Division side Worksop Town after less than a season in charge at Langwith Road.

Watts had been the boss of Shirebrook’s NCEL rivals Hallam FC, whilst Camm and Bacon both left the playing staff at Rainworth Miners Welfare to join Shirebrook and take a step into the coaching side of the game. All three had played professionally in English football.

Meanwhile, away from team affairs, Shirebrook have put together a strong working committee under new club chairman Daniel Marsh, whilst the close-season has seen the planned pitch maintenance programme continue.

At pitch side, in addition to routine annual painting/repair works, extensive improvements have been carried out on the Langwith Road side of the ground to improve visitor safety and comfort.

The former metal sheet boundary fence on that side has been replaced with blockwork, with new entrances and approaches for spectators, players and match officials, and also for emergency vehicles. Inside the ground, the covered accommodation for spectators on the Langwith Road side has been extended away from the catering area.

However, once again things didn’t go quite as well as anticipated on the field and, following a run of poor results, Watts was replaced at the end of October 2013 by former Rainworth Miners Welfare boss Kevin Gee who, before taking charge of The Wrens in November 2011, had been assistant manager and operations director at Glapwell FC.

Nevertheless, Gee’s tenure at Langwith Road was similarly brief and he was released 1st February 2014, president James Doody announcing that Gee and his assistant Ian Whyte had gone with immediate effect, stating that he (Doody) and chairman Daniel Marsh had both agreed that the club needed a management team that would provide consistency and a long term solution for the club.

And the announcement of Gee’s departure on the club website was soon followed with another saying Mark Camm and Danny Bacon had been appointed as permanent first team managers on a long term deal up until the end of the 2015/16 season.

Doody said: “Mark and Danny tick all the right boxes, and we are really excited about the future and now know we can all relax knowing the long term future is in good hands.”